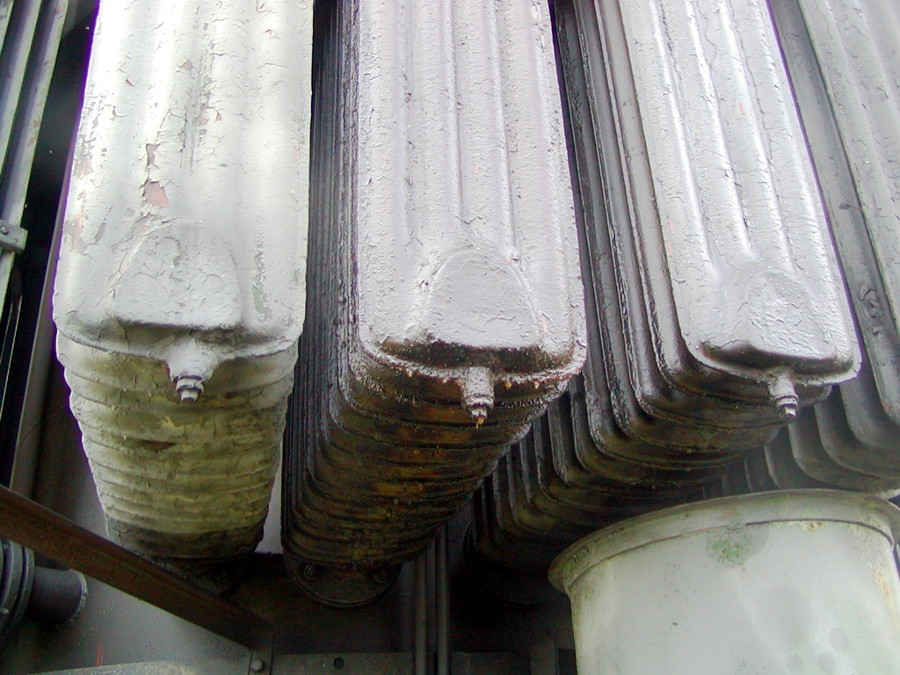 Radiators leaks are caused by the corrosion of the material used, poor protection of the paint coatings and the technology of making radiators in the course of their production.
The occasional caulking of radiators has no effect which would ensure elimination of the problem of the cooling system leaks for a longer period of time.
The second serious problem that occurs during the operation of the transformers is the noise level coming from the operation of fans working in the cooling system.

The operators of transformers decide more frequently to replace old coolers for new ones.
Replacement of coolers and fans with new ones entails large capital expenditures and the need to shut down the transformer for a longer period of time.

Energo-Silesia has the pleasure to present you an alternative way to modernize old cooler cooling systems.
Our company cooperates with scientists from AGH in Cracow, who among other things deal every day with cooling problems in liquid-gas coolers. We propose to replace the cooling systems based on coolers with forced air circulation through free standing cooling systems based on oil-air coolers for the construction of which we use pipes ribbed on two sides.

In order to convince you of our concept of modernization of old cooler cooling systems, we present below a couple of arguments which we hope will convince the maintenance and repair services in respect of our proposal to solve the problem of leaks of old cooling systems and to reduce noise coming from fans working in these systems.

In modern oil-air coolers there are used the pipes produced by the method of cold slanted rolling. The pipes produced in a way have high thermal efficiency resulting from the large expansion of the outer surface and the high metal pressure in the bimetal joint, additionally, these pipes have a very high corrosion resistance in an acidic environment. The efficiency of the rolled ribbed pipes is a function of the degree of expansion of the outer surface of the pipe, the difference in air temperatures and cooled medium as well as the numerical value of the heat transfer coefficient.

With the established geometry of outer ribbing of the pipe, the heat transfer coefficient is significantly dependent on the ratio of the outer surface to the inner surface of the pipe. In order to improve the efficiency of the cooler, it is necessary to expand the internal surfaces of the ribbed pipes.
In oil-air coolers proposed by our company, there are installed pipes with a developed inner surface.

In the photos we present the proposed solution of expanding the inner surface of the pipe while maintaining the geometry of the outer ribs unchanged:
The comparison of heat output of ribbed pipes on both sides in relation to the pipes ribbed only internally, based on the experimental studies of the cooler sections carried out on the test stand, indicates an increase in thermal efficiency of up to about 30% in favour of the first pipes. The internally ribbed pipes are especially suitable for cooling viscous media such as transformer oil, hydraulic oil.

Application of the proposed solutions for the required cooling capacity enables reduction of the cooler dimensions and material costs of its performance in relation to a cooler made of internally smooth ribbed pipes.
The cost of upgrading the old cooling system with the use of our produced oil-air coolers is comparable to the cost of replacing old coolers with new galvanized ones with the simultaneous replacement of valves and fans.

In addition, we obtain additional effects in the form of: